You can design a Zobel network for your woofer by starting with a resistor at least 10 Watt equal to the nominal impedance of the driver.

For an 8 Ohm woofer you would use an 8 Ohm resistor, 4 Ohm woofer, 4 Ohm resistor, and so on. Solid state amplifiers with a decent amount of negative feedback to maintain a low output impedance An example would be if your SS amp puts out W into 8 Ohm, it will put out W into 4 Ohm with the same input signal. If that amp is connected directly to the speaker, as is the case for the OP's active setup, then a zobel is pointless. SS amps can easily handle the load presented by any transducer that uses a voice coil.

Tube amps that employ output transformers and lower amounts of negative feedback tend to have higher output impedance. In the case of a tube amp, the output will vary more with load variation than the solid state amp. In that case, a zobel can be useful to keep the output of the tube amp from rising as the load impedance rises. Zobel networks are not always required in a crossover.

Their use depends on the drivers and the crossover topology used. The electrical transfer function is used to shape the acoustic transfer function so that it follows a prescribed slope. In many cases of crossover design, a zobel is used to provide control of filter "Q"around the crossover point. As to whether crossovers add "distortion" to the pass band, consider that whatever distortions they might add are at least 40dB smaller than the distortion present in the driver itself.

Drivers run full range, those asked to produce bass frequencies requiring large excursions of the voice coil, with high frequency undulations on top of that, will have the highest distortion of any component in the signal chain. Might I suggest that we short circuit, as it were, the current vs. To start, I'd suggest Nelson Pass, specifically the current source related white papers on his First Watt website.

The First Watt F1 and F2 amps are solid state "current source" amplifiers, rather than the more common voltage source amplifier. The manuals for those amps have additional background.

For what it's worth, I would suggest that sweeping generalizations aren't likely to advance this conversation significantly. Everything is a compromise, and putting something in the signal path is not necessarily a bad thing if it solves more problems than it creates. Though if you can avoid a problem via another method, then so much the better. More significantly, "in the signal path" is somewhat relative. Not all parts are "in the path" at all frequencies, much less components in a shunt path. In the end, what works for you is what matters.

Quiet Earth, to address your point on the last page, I didn't mean to imply that a Zobel couldn't be used in an active system. Your points are valid, though without a power dissipating passive crossover in front of the drivers and the limited range over which you need to run the drivers vs. Thanks for the additional comments! You're missing or not understanding the points that are being made.

Not only by me, but Pete, Scotty, and Quiet Earth as well. Anyways, the 10k resistor comment was a retort to your comment that "you can't put anything across the speaker terminals without its affecting the sound. It's completely innocuous in that position. Interestingly enough, I have consistently preferred the sound of conventional tweeters with a zobel in place to the sound they have when used without one regardless of the type of amplifier driving them, tube or SS.

I suspect there is less distortion being produced by the combination of driver and amplifier when a zobel is in place.

Yeah, that may be a case where something being picked up by the speaker wires is being returned and interacting with the feedback gain of the amplifier I thought I made clear maybe I didn't to neo in my earlier comment, that a crossover network is a "variable" and would certainly account for an audible difference if a Zobel was used or not Cookies help us provide you a better browsing experience.

By using our site, you consent to the use of cookies by us. Or not used by the driver, or reflected back into the amp, etc. Design formulas are inexact and have to be tried. 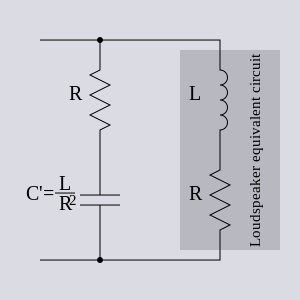 In general, the resistor Rc should be 1. L is voice coil inductance in henries. If the cap value is too high you'll have an impedance dip.

You're connecting a parallel load to your driver and it has to coinside with the impedance curve. BTW, 2 watt resistor is not enough power handling for a woofer. I noticed that Alpha-Core speakers are now offering what the call an RC circuit built into their speaker cables, that I believe effective obtains the same results.

Can anybody further enlighten me? Imagine a capacitor and a resistor connected in series one form of an "RC" circuit. This is a Zobel network, I assume named after some dude named Zobel. Hey, I'm not an historian. All dynamic drivers have an inductive component due to the fact that a voice coil is exactly the shape of an inductor.

This causes the electrical phase to become increasingly inductive at high frequencies, which can drive some amps into oscillation. Not normally a problem, but the Zobel network, if designed properly, will virtually flatten the impedance and phase at high frequencies and eliminate any possibility of the problem developing. One problem amplifiers have is the instability resulting from low frequency signals. The amps will oscillate at a high frequency when there is no inductive load at the speaker. The zobel network acts like an automobile shock absorber.